On May 01, 2010 the World Expo 2010 opened in Shanghai, China. Besides other things, its a venerable feast of architecture

Countries have come out with their best architectural foot forward and some of the national pavilions are stunning examples of the contemporary architectural vocabulary of those countries. However all attempts to get a better look at the Indian Pavilion at the Expo has been a disappointing task. 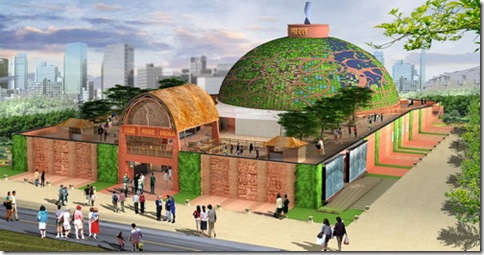 The above picture is one of the few official ones that have been released by the Chinese Expo Authority. And the Director of the Indian Pavilion Rajesh Kumar, can be seen here talking about the design.

The pavilion designs for India …for the oncoming Shanghai Expo is a multi million dollar incongruity at the expense of  the countries’ tax payers. The theme of expo is “Better city, Better life”, a very timely theme indeed  when more than half the world’s population live in cities. To which……… the Indian design team answers the call with a design that resembles a  burial mound for Buddhist relics from 3rd century BC – the Sanchi Stupa. [link]

However the Indian media is either ignorant of this event and the pavilion, or in the case where they do talk about it, they completely miss the point.

In this self-congratulatory story The Hindu writes

Sandwiched between the two most expensive pavilions is India’s, which, perhaps, is the structure that most represents the Expo’s now almost-forgotten theme — “better city, better life,” a call for sustainable urban development.

Last week, Indian designers and Chinese engineers were working to put finishing touches to the $9-million pavilion, which will be unveiled next month.

The design is inspired by the Sanchi Stupa. It’s defining feature is a 35 metre-wide dome which will be the world’s biggest bamboo structure.

The design, conceived by D.R. Naidu of Design C, seeks to make a green statement, “expounding harmonious living as a way of life.”

“What we want to convey through this pavilion is [not only] a message for sustainable development, but also India’s own sense of harmony, through the ages,” said Arindam Ryan Roy Chowdhury, a project manager for Design C at the Expo site. [link]

Joe Drury at China Briefing has an interesting account of the pavilion design.

India is home to over 2,000 ethnic groups, speaking over 1,600 languages and dialects and worshipping every major religion. At the 2010 World Expo in Shanghai, India’s 4,000 square meter pavilion stands as a monument to its ability to forge a sense of harmony and national unity from this disparate society despite the contradictions and sometimes violent differences that naturally arise in such an environment.

With the theme “Cities of Harmony,” the pavilion by extension also projects an international message of global unity, especially relevant to India as the country experiences the natural growing pains of greater influence in Asia and abroad. [link]

Many would today question the very idea of a World Expo. It started in the late 19th Century as a way of bringing the world as a microcosm to a distant place. However in today’s day and age of instant imagery and media, a lot of the original purpose of the mega events is somehow lost. Countries spend millions of dollars to one-up each other and these pavilions may land up being giant billboards of a country.

In this scenario, where do you think India’s pavilion stands? If you have had a chance to visit the Pavilion, please express your thoughts.

I live in shanghai and had an opportunity to visit the expo site.After standing in a long line up we entered into the India pavilion with expectations.The plan is crapy and lacks cleanliness and orderliness.Except for the hologram show all the other features are not worthy.The food section is a disaster especially the stall INDOCURRY where they sell burned naan and other so called indian dishes.There is no place to dine.The cooks were displaying rowdy behaviour to get the attention of the girls there.The indian artifacts sold at the stores are randomly overpriced and a rip off.We felt as if we have been to an underdeveloped indian village.JAI HIND.WE HAVE TO DISPLAY A GOOD DECENT SHOW IF YOU TO BE RESPECTED ABROAD.
Thanks

I remember trying to look for the Indian pavilion in my friend’s pictures who visited the expo. But now I can understand why it was not clicked. It is an eye sore. If that is our billboard, nobody would want to have anything to do with us. I can not understand the psyche of the architect when he says ‘expounding harmonious living as a way of life’ and the project manager saying ‘sense of harmony’. To me it just seems like big words used to unsuccessfully cover up a bad kitschy design. Yes, it is always good to be inspired by one’s heritage and history but not literally copy it. We need to move forward and not go backwards to duplicate to veil our design inefficiencies.

‘expounding harmonious living as a way of life’ Exactly the way live. But the architect who designed this pavilion interpreted in his own shabby way to portray our Indian divinely customs and tradition. Its so dreadful and painful to see the literal imitation of stupa and potpourri of Indian hustle and bustle which does even relates each other.If he really wanna tell about the ethic of india, u should have pictured in more decent manner. what shown as indian pavilion looks like mere the pile of junk. the architect should have taught about the fast developing world with its own magnificent technology. No one can refuse we do adopt those technology. In this case why the architect tried ti veil that with his green trees… Is this only what we? please be sensible. please don’t spoil our country name in front of other nation. Please select a wright person to design for next expo.
This pavilion is really an insane and amature!! so sense less and creative less and create black mark on we indian.

arzan i would like to talk to you about nari gandhi. contact me on my email address

There are a hundred problems with the pavilion- the haphazard way in which the solar panels were strewn over the dome, the fact that the vegetation on top dried up to rot…. and many more. Is that what we should be highlighting when we remember and discuss our county’s pavilion?
I did not visit the pavilion, i had to rely on the pictures i could find on the internet. The design, i must admit, is not new, shocking, or fancy. But, it is simple. And in a search for an Indian identity and an icon of sustainability- it does score points.
Let this be a discussion relating to only the architecture of the pavilion. Please don’t mix it up with the service of the guard on the door, or the cook in the stall (although they do play a big role in the success of the pavilion, this is a discussion on its architecture, on the blog UAI).
@Debjani: if you cannot understand something as simple as a sense of harmony, you probably shouldn’t be commenting here. As far as the issue with copying is concerned- please grow up. Imitating a well established symbol is one way of going about it. There are other ways i agree, but if this is what has been done, maybe you could try understand it further. The dome, and the pavilion itself, has been built with a remarkable quality of craftsmanship.
We should be PROUD of having built the greenest, and largest dome, using bamboo for our country’s symbol. Instead of finding fault with it. Every design has its own set of problems. The pavilion is no small achievement, and the least you can do is appreciate its finer qualities. Do what you can to help make the Indian image better. While every other country glorifies its achievements we should not criticize & blame the people that have worked hard on this.