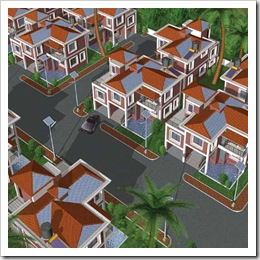 Rabi Rashmi Abasan, India’s first solar housing complex, conceived by WBREDA and engineered and managed by Bengal DCL on a plot of 1.76 acres in New Town Kolkata. Destined to be a dazzling milestone in the development of housing complexes in India where every owner will not only have his land but also generate his own power for domestic use as well as for feeding the grid.

Solar PV (Photo Voltaic) technology has a widespread application and is used to convert solar rays into electricity. About 700 MW of generation capacity has been added in 2004 alone, bringing the world total to 2500 MW.The application of Building Integrated Photo Voltaic (BIPV) technology, used in Rabi Rashmi Abasan, has been growing a rate of more than 50% during last 10 years, Japan, Germany and USA having taken the lead.

In Rabi Rashmi Abasan, each home will generate 2kW of power from solar tiles on the roof for its own consumption and feeding the surplus into the grid. The owner will also get power from the grid as and when necessary. The utility will pay the house owner and vice-versa on net monthly metering. Benefits of Energy Banking will also be available to the house owners. Each house will have solar water heaters and solar signage; area lighting will be done by solar streetlights.