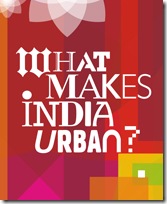 The Symposium "What Makes India Urban?" will be held in English.

Please note to kindly sign up for this event until 30th Sept under: ug@aedes-arc.de

“India is undergoing an epochal transformation. From a rural agricultural society it is becoming a largely urban society. The biggest story in India today is the drama of India transforming its cities to accommodate ever larger numbers of people, and, Indians learning how to live in cities and learning to make sense of them. Will India’s cities add to, or address, the difficult environmental problems the world faces? Will India build cities that make the life of all its people more livable, or will it find ever more ingenious ways of excluding the poor from the hope and promise of city life? Will India transform governance of its cities to strengthen the idea of democracy or will it choose a more authoritarian course? Will India teach the world a new way to think of and live in cities? Answers to these questions will determine the fate, not only of India, but of the world as a whole. I suggest that in this symposium, we keep these questions in the forefront. Hopefully, at the end of it we will have a better sense of how, if at all, India is changing the meaning of what it is to be urban.”

Bimal Patel will inaugurate the event through a general overview and the introduction of the audience to the leading questions of the symposium. These will be picked up again in the final discussion.

PART ONE: STATEMENTS FROM INDIA

As a PhD in City and Regional Planning as well as being an architect, Mr. Patel is one of the most competent and creative minds in this field. His major project at the moment, which will also be part of the exhibition, is the redevelopment of the riverfront of the Sabarmati River running through the city Ahmedabad in the state of Gujarat. He is the Director of HCP DESIGN, a 46 years old firm with has individual divisions for architecture, interior design, furniture design and project management. Bimal Patel is the Managing Director of ENVIRONMENTAL PLANNING COLLABORATIVE (EPC), a not-for-profit professional planning and development Management Company. EPC has been doing pioneering work in developing planning methodologies appropriate to the present Indian context. The company is interacting with various municipal corporations and urban development authorities in Gujarat. As an introducing speech, Mr. Patel will give insight into recent developments in Indian cities and new challenges urbanism is being charged with.

CSE, a Delhi-based NGO, is a public interest research and advocacy organisation. CSE conducts research in the field of environment and development and its interdependences, engaging with issues like environment and industry but also with air, water and soil pollution. Environment education and its implementation into school schedules is also one of the main areas of concern of CSE. Ms. Roy Chowdhury will introduce the audience to problems and difficulties in relation to environmental issues, which are especially confined to urbanization in India.

Harsh Purohit is the Founder Director of COGNITO, a full service design agency and sustainability advisory which specializes in seeding and cascading the practice of sustainability in organisations through successful deployment of multi-disciplinary design and communication tools. He is a sustainability strategist and performs at the intersection of sustainability, design, technology, and profits. In 15 years at COGNITO, he has spearheaded design and communication projects with different brands. In order to contribute to the challenge of global warming, he led COGNITO to specialize in ‘sustainability communication’ and later on, in the course of partnering with different progressive clients, he played a vital role in helping organizations internalize sustainability. Today, COGNITO is India’s leading advisory in the field of Sustainability Propagation and recognized across the globe for their unique high impact approach. Harsh is actively involved in consultations on development of global reporting frameworks, gender equality and sustainable innovations. Regular speaking engagements on various facets of sustainability have seen him travel across India and Europe.

On the webpage one reads: “The late 20th Century was the age of economic globalisation. The first part of the 21st Century will be the age of the city, the ‘Urban Age.’” Based on this thought, the ALFRED HERRHAUSEN SOCIETY founded the URBAN AGE PROGRAMME, which engages in researching the future of cities and megacities. The idea is to build up a network consisting of academic experts and intellectuals as well as of political leaders, city mayors, urban practitioners and private sector representatives in order to encourage discourse about the topic. In a timeframe of six years, between 2005 and 2010, international annual conferences are taking place where recent developments in infrastructure, mobility, governance and other subjects are being discussed. Besides being a researcher, Philipp Rode is the Executive Director of the URBAN AGE PROGRAMME and Associate with the CITIES PROGRAMME at the LONDON SCHOOL OF ECONOMICS AND POLITICAL SCIENCE. He is mainly involved in interdisciplinary projects about urban governance, transport, city planning and urban design and has organized many conferences all over the globe. He has previously worked on several multidisciplinary research and consultancy projects in New York and Berlin and was awarded the SCHINKEL URBAN DESIGN PRIZE 2000. Rode holds an M.Sc. in City Design and Social Science at LSE as well as a degree as Graduate Engineer in Transport Planning and Management at TECHNICAL UNIVERSITY BERLIN.

Andrew Comer is a very experienced civil engineer at Happold being in charge of the coordination of the companies Infrastructure, Transport and Environment groups and the management of multi-disciplinary project teams. In his lecture, Comer will talk about his work, which is concentrating on the implementation of new technologies for urban regeneration and infrastructure development schemes (e.g. highway engineering and transportation to airports, ports, rivers and marinas) in order to reduce the demand on natural resources but yet not neglecting cost-effectiveness.

Sustainable Hyderabad is a project initiated by the HU Berlin and the German Federal Ministry of Research and Education. The project runs over a timeframe of five years with the perspective of establishing Hyderabad as a Low Emission City in Asia. It focuses on the mitigation and adjustment of increasing greenhouse gas emissions, which are due to the rising living standard of the urban middleclass of Hyderabad as well as to the growing numbers of motor vehicles. Mr. Rommel’s speech will deal with the objectives of the project and with the challenges of its implementation.

INTERMISSION/EXCURSUS: URBANISM FROM A DIFFERENT PERSPECTIVE

Since quitting as a senior executive in the print media industry some 15 years ago to assist a friend making a TV documentary on Bengali playwrights who had used music as an essential element of their work, Patrick has never looked back. He worked as the art department coordinator in Gallenberger’s Shadows of Time, as well as on a number of projects under the aegis of GOETHE-INSTITUTE Kolkata. A self-confessed lover-hater of Kolkata, Patrick’s love of music also brought him and Christopher Dell together for the project KOLKATA MONODOSIS which will also be part of the exhibition.

In reference to the introductory questions, Bimal Patel and Naresh Narasimhan will evaluate the contents of the preceeded lectures in the shape of a final discussion on the panel together with Rohit Mujumdar and Aravamuthan Srivathsan from Chennai resp. Mumbai.

V. Narasimhan (Naresh), is the Managing Partner of Venkataraman Associates (VA), a renowned 40-year-old Architectural Engineering firm based in Bangalore. A graduate in Architecture from the Manipal Institute of Technology, with a post graduation in Project Appraisal and Risk Management from Harvard University, he has led the expansion of VA into diversified markets in Research & Development, Specialized Manufacturing, IT Business Parks, Public and Institutional buildings and Residential complexes. An open-door style of leadership, mentoring and training for the firm’s staff of over 180 people, has enabled the design of over 450 facilities for leading Indian and American companies and institutions. With an understanding of global trends in urban design, regional planning, infrastructure, sustainable development and green buildings, Naresh also has a keen interest in architectural theory, economic modelling and cartography. A member of the Indian Institute of Architects and the Council of Architecture, as well as a founder of the Bangalore Action Task Force, a public private initiative to address the problems of Bangalore’s infrastructure, he advises several government departments on issues pertaining to building and infrastructure development. He is a frequent speaker at conferences and has published many articles in several publications on architectural design, infrastructure development and urban planning. Other interests include films, quizzing, information technology & applications, human resources, corporate governance, creative management and quality education.

Rohit Mujumdar is a graduate in architecture from the KAMLA RAHEJA VIDYANIDHI INSTITUTE OF ARCHITECTURE (KRVIA), Mumbai, and obtained his Masters in Urban Planning at the SCHOOL OF ARCHITECTURE in NEW DELHI. He is presently visiting lecturer at KRVIA and besides teaching, he is involved in the conceptualization and coordination of KRVIA´S exchange programme with BERN UNIVERSITY. During his fellowship at KRVIA, he undertook postgraduate research on architectural education in India and with him being part of the KRVIA DESIGN CELL, he was involved in the exhibition CENTURY CITIES: ART AND CULTURE IN THE MODERN METROPOLIS at Tate Modern in London, in documentation and conservation of the heritage precincts of Dadar-Matunga-Wadala, and a project to develop housing for slum-dwellers. In the study of the redevelopment of Mumbai’s Eastern Waterfront, his specific interest has been in studying the informal economy enterprises in the Port and Dock Lands. In COLLECTIVE RESEARCH INITIATIVES TRUST (CRIT), he is involved in work with communities in Kamathipura-Kumbharwada-Khetwadi, Bandra Reclamation, and Vasai-Virar, and was part of the IMAGE CITIES exhibition on architecture and urbanism in Copenhagen, Denmark.

Aravamuthan Srivathsan is currently Deputy Editor with THE HINDU, a national newspaper, and writes on cities and architecture. Furthermore, he is visiting faculty with the School of Architecture and Planning, ANNA UNIVERSITY and with ASIAN COLLEGE OF JOURNALISM, Chennai. Aravamuthan Srivathsan received an M. Arch. from the SCHOOL OF PLANNING AND ARCHITECTURE, New Delhi, and a PhD from the INDIAN INSTITUTE OF TECHNOLOGY, Chennai. He was Fulbright Fellow at the UNIVERSITY OF CALIFORNIA in 2003 during which he conducted research on the construction of Hindu temples in America and their similarities and differences in comparison to Hindu temples in India. At present, he serves also as a member of the monitoring committee at the CHENNAI METROPOLITAN DEVELOPMENT AUTHORITY.