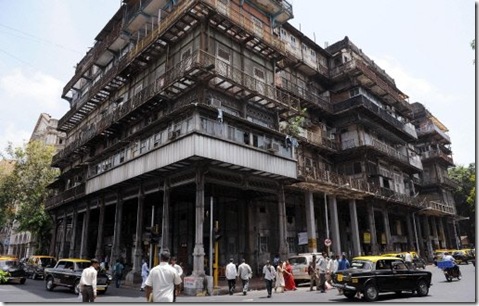 MUMBAI (AFP) — In the days of the British Raj, Watson’s Hotel in Bombay was the place to stay and be seen, its sweeping staircases, plush bars, restaurants and grand ballroom a symbol of colonial splendour.

But with the British long gone from India and the 150-room hotel closed, renamed and taken over by a ragbag of shops, offices and tenants, the distinctive building in the city now called Mumbai faces an uncertain future.

Despite the 138-year-old building being protected by law, years of neglect have seen it placed on the local municipal authority’s "most dilapidated" list of dangerous structures at risk of collapse during the monsoon rains.

That prospect has enraged heritage campaigners, who see the pre-fabricated five-storey building as a vital part of the city’s rich and varied history.

"It’s iconic. But it’s endemic of the problems that face a lot of India’s historic buildings," she told AFP.

Watson’s Hotel, where France’s Lumiere Brothers first showed their newfangled invention of cinematography in India in 1896 and the US writer Mark Twain once stayed, has been under threat for some time.

In 1999, a survey carried out by the Mumbai-based Urban Design Research Institute (UDRI) found the building was suffering from "severe structural distress" but there was not enough money to repair it.

Six years later, two balconies collapsed onto the street below, killing one person and injuring six others. The collapse was described at the time as a "disaster waiting to happen".

The New York-based non-governmental organisation the World Monuments Fund placed Esplanade Mansions, as the privately-owned former "whites only" hotel is now known, on a list of the world’s 100 most endangered monuments in 2006.

"Even if there is a benefactor who says ‘I will restore this building,’ the logistics of being able to physically move the tenants out and restore it is a nightmare," said Lambah, who sits on the UDRI executive committee.

In a sign of the difficulties, tenants — many of them law firms serving the nearby courts — have told the state housing and development body that they will not leave the premises while repair work is carried out.

Laws exist to protect historic buildings, but like much in India, they are either not enforced, liable to pressure from builders and politicians or disregarded in the battle for space in the country’s rapidly growing cities.

In Mumbai alone, a city of 18 million people and two UNESCO World Heritage Sites — the Chhatrapati Shivaji Terminus and Elephanta Caves — the restoration of several historic buildings is caught up in a mass of bureaucracy.

Redevelopment plans for Crawford Market, a historic but crumbling working bazaar partly-designed by the father of British writer Rudyard Kipling in the mid-19th century, have been discussed for years, without much headway.

One proposal even suggested razing parts of the Gothic building, which was the first in the city to have electric lighting, to make way for a modern mall.

Lambah, who fought the demolition plans, is involved in restoring Mumbai’s opera house — the only one in India — as well as the Romanesque Elphinstone College, whose alumni include major figures in Indian nationalism.

But despite receiving the go-ahead for the opera house project from Mumbai’s heritage committee last year, she is still waiting for other cogs in the municipal machinery to turn.

"There’s a huge amount of red tape and bureaucracy for each project. That’s the essence of the problem," she said.

For campaigners, public ignorance, apathy, government agencies not working together and a lack of conservation specialists are threatening the very existence of India’s wealth of heritage sites.

Cities like Paris or London have made their historic buildings into an asset, making them tourist attractions, often with the help of the private sector and non-governmental organisations, she said.

"It’s this that we need to shake up. We need to change the mindset that heritage is not a liability," she said.