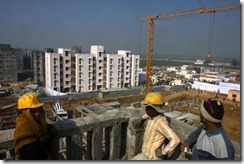 Having lost intervening centuries when cities across the world came into their own, Indian cities are struggling to play catch-up

India’s arc of urbanization went into deep freeze under the British Raj. We remained a largely agrarian, land-based economy, while around the world, cities were the catalysts of societies morphing from agrarian to industrial nations. Even today, these cities continue to trigger innovations and fuel progress across the entire spectrum of social, cultural and economic activity.

Having lost the intervening centuries when cities around the world came into their own, Indian cities are struggling to play catch-up. This is evident in Janaagraha’s Annual Survey of India’s City-Systems, which assessed India’s top eleven cities. The report was released recently.

One of the four themes was Urban Planning and Design, where Indian cities averaged 2.7 on 10, while London and New York scored 8.8. Clearly, there are major gaps in the spatial planning of our cities.